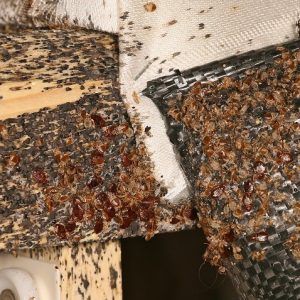 Unlike mighty trees or lumbering mammals whose generations may be measured in decades, insects can undergo multiple generations within a single year.  Not only that but insects have a propensity to sire tens if not hundreds of offspring with each breeding cycle and in a rapid succession.  This allows insect populations to be much more adaptable when faced with a lethal stimulus, allowing not only for the survival of the species, but in some cases allowing that species to thrive in artificial niche environments created by humans.

Within this article we will focus primarily on Cimicidae, the bedbugs. There are two key pest species of bedbug worldwide, C. lectularius and C. hemipterus and, whilst the expression of resistances might alter slightly between these two species, the function of these mechanisms is sufficiently similar that we will refer to both species collectively as bedbugs.

Bedbugs are arthropods that start life as a creamy white egg shaped like a banana and only a millimeter in length.  Upon reaching maturity female bedbugs can produce 2-3 eggs a day and up to 400-500 throughout their adult life. The adults are 5-7mm long and dorsoventrally flattened.  Throughout their lives they will feed on their hosts, drawing blood at night and returning to their refuges within cracks and cervices where they will spend the majority of their time[i].  They have indeed been engaging in this behaviour for an exceedingly long time. A paper[ii] claimed that early species of bedbugs most likely started to feed on (or had the capacity to feed on) humans when humans first started to inhabit caves, more specifically when they cohabited with bats in these caves up to 11,000 years ago.  Regardless of when and how we first became associated with these pests, we are certainly still living with them and, as time goes on, they appear to be getting more difficult to control.

In the 1950s an increase in hygiene and housekeeping, as a result of new Integrated Pest Management (IPM) strategies as well as the availability of new chemicals, led to a decrease in bedbug numbers.  However, by the mid 1990s these numbers were reported to be on the increase[iii]. There are many reasons why bedbug control was failing but as most of the control programmes undertaken globally focused on the use of chemicals; it appears that one of the key reasons for failure was the prevalence of insecticide resistance within bedbug populations.

The Insecticide Resistance Action Committee (IRAC) defines insecticide resistance as, ‘a heritable change in the sensitivity of a pest population that is reflected in the repeated failure of a product to achieve the expected level of control when used according to the label recommendation for that pest species’[iv].

Insecticide resistance therefore is the byproduct of human intervention, an unnatural selection process which favours traits or behaviour not normally seen in undisturbed ‘wild’ populations.  These resistances can be split into two major groups, behavioral resistance and physiological resistance, with the latter being further subdivided into: penetration resistance, metabolic resistance and knockdown resistance[v].

An unnatural arms race.
Over the past 70 years the whole concept of bedbug management can be considered as an arms race.  On the one side the implacable tide of evolution and on the other, human ingenuity and determination.  In the following passages I will attempt to outline the resistance mechanisms observed in bedbugs and how humans have attempted to negate them.

To start we can take the bedbugs most historic and enduring feature, its cryptic nature and nocturnal feeding patterns.  Both can be considered a form of stimulus independent behavioural resistance which can result in a decreased detection rate of bedbugs during surveys[vi]. This allows for populations to become fully entrenched before they are realised and will also potentially reduce the efficacy of any control programme.  Recently there have been a series of novel devices aimed at increasing the detection of bedbugs ranging from: pitfall traps, pheromone lures and even the use of specially trained dogs.

All these tools will assist in the battle against this behavioral resistance, but they cannot be used exclusively. To properly combat behavioural resistance there is no substitute for training, education and diligence. Well trained Pest Control Operators (PCO’s) will not only be able to use the tools to their maximum benefit, but will be able to more quickly and effectively ascertain the presence of infestations by drawing on pre-existing knowledge.  Education of hotel staff and members of the public allows infestations to be detected sooner, allowing for a more effective treatment strategy.  Finally, the diligence required to undertake a thorough survey, and treatment without making assumptions, will mean that cryptic populations acting outside of normal behaviour patterns will be caught within the treatment, leading to longer lasting and successful control.

After a thorough survey has been conducted and populations located and identified, a treatment strategy needs to be considered and implemented.  Chemical control is still one of the most widely used treatment options for bedbugs and, as a result, bedbugs have started to develop physiological traits which are key in resisting insecticidal treatments[vii]

The first is the increase in cuticle thickness or density, leading to a decreased penetration of insecticidal molecules into the bedbug.  A series of proteins within the cuticle of the bedbug have been shown to undergo upregulation in bedbugs, effectively thickening the cuticle with proteins which inhibits the passage of insecticidal materials[viii].

Studies have shown that the upregulation of these proteins within the cuticle leads to a direct and significant correlation to resistance to insecticidal treatments[ix]. The increase in these proteins also revealed an increased time to knockdown in bedbugs, meaning that not only was there a reduction in the bioavailability of the insecticide, but there was an increase in the time taken for penetration to occur.  This increased time frame may well work in synergy with existing detoxification mechanisms within the bedbug, allowing the insecticide to be neutralized and excreted more effectively or, potentially, even before it has had the opportunity to elicit any effect at all.

It will be impossible to tell visually whether a bedbug has this trait, so it is best to assume the worst and that some, if not all, of the population will be exhibiting this trait to one degree or another.  In fact, almost 71.4% of bedbugs taken from wild samples were shown to be exhibiting as many as 5 mechanisms of insecticidal resistance[x].  Therefore, both application and formulation selection need to be crucial during treatment.  Application needs to be thorough and consistent with the use of specific nozzles for application into specific areas.  The use of a pressure management system will also allow for a consistently even treatment over the entire area, reducing the likelihood of underdosing key areas due to pressure drop.  Regarding formulation, there are two things to consider.  Firstly, because there will be a reduced uptake of insecticide on contact, you will need to ensure that the surfaces being sprayed will provide the best substrate for your formulation.  Porous surfaces are likely to wick the carrier and the insecticide into them, reducing the amount of insecticide exposed to the bedbug.  On non-porous surfaces formulations which have been formulated to be micro or nano suspensions will be more readily able to penetrate the cuticle of bedbugs, allowing for a faster and more complete movement of insecticide through the cuticle.  In all instances however it is highly recommended that the area to be treated is thoroughly cleaned prior to spraying because dirt, dust and other organic materials will ablate and degrade the insecticides, reducing the level of insecticide available for exposure to the bedbug.

Metabolic resistances occur when there is an elevated level of specific enzymes designed to detoxify and clear xenobiotic material.  It is one of the key mechanisms of resistance within bedbugs and has been widely studied with three key groups of enzymes responsible for a broad spectrum of resistances which may confirm resistance to multiple classes of insecticides.  Elevated levels of the enzymes from the P450 and Esterase groups, as well as increased levels of ATP-binding cassette (Abc) transporters, are all well documented to confer significant levels of resistance to insecticides[xi]. There is a wealth of information on these enzymes, but in synopsis the P450 and Esterase systems are responsible for the detoxification of pyrethroids and carbamates respectively, although there is evidence to support a cross linking of resistance mechanisms.  ABC transporters are responsible for the movement of nutrients into cells and for the removal of toxins from them[xii]. An increase in ABC transporters will facilitate the removal of toxins from a cell at a more rapid pace.  Elevated levels of one or all of these factors will therefore lead to a significant change in the bedbug’s resistance status.

The final card in this evolutionary arms race between bedbug and human is target site desensitization, which is caused by a single or multipoint mutation in the bedbugs DNA[xiv]. This mutation alters the shape of the target protein or enzyme so that the insecticide is unable to properly interact with, or bind to, it. These altered target sites will usually show a high resistance to all insecticides within the same class. Therefore, with this type of resistance mechanism, bedbugs which are resistant to cypermethrin are also likely to be resistant to permethrin or allethrin.  Unlike metabolic resistances there is no chemical synergist capable of circumventing this resistance and each partial or incomplete treatment will leave more bedbugs within the population expressing this genetic trait, increasing its frequency in subsequent generations.  Therefore, a new strategy needs to be employed in order to combat this mechanism.

The use of IGR’s (Insect growth regulators) is becoming a popular strategy in these scenarios.  Specific IGR’s such as pyriproxyfen are juvenile growth hormone analogues which will interrupt the bedbug’s ability to moult properly, or even at all.  They also will have an effect on adult bedbugs and freshly laid eggs, effectively sterilizing them.  These processes still influence bedbugs with target site desensitization because they utilize a mode of action independent to that of the primary insecticide.  This means that any bedbugs which survive the initial treatment are unlikely to be able to grow or breed.  In studies undertaken by the University of Wales, Cardiff, bedbugs treated with pyriproxyfen showed a 96% decrease in egg production compared to a control with the eggs that were produced by the treated bedbugs being largely sterile, with only 13.3% being viable[xv].

In conclusion, bedbug resistance is often multifaceted and complex.  There is no one singular action which will be capable of overcoming it.  The answer lies in implementing robust Integrated Pest Management strategies which consider all of the above mechanisms and their ramifications, from training staff and educating clients, to choosing the correct active materials within the right formulation base which is suitable for the area to be treated, as well as applying the products effectively and efficiently.