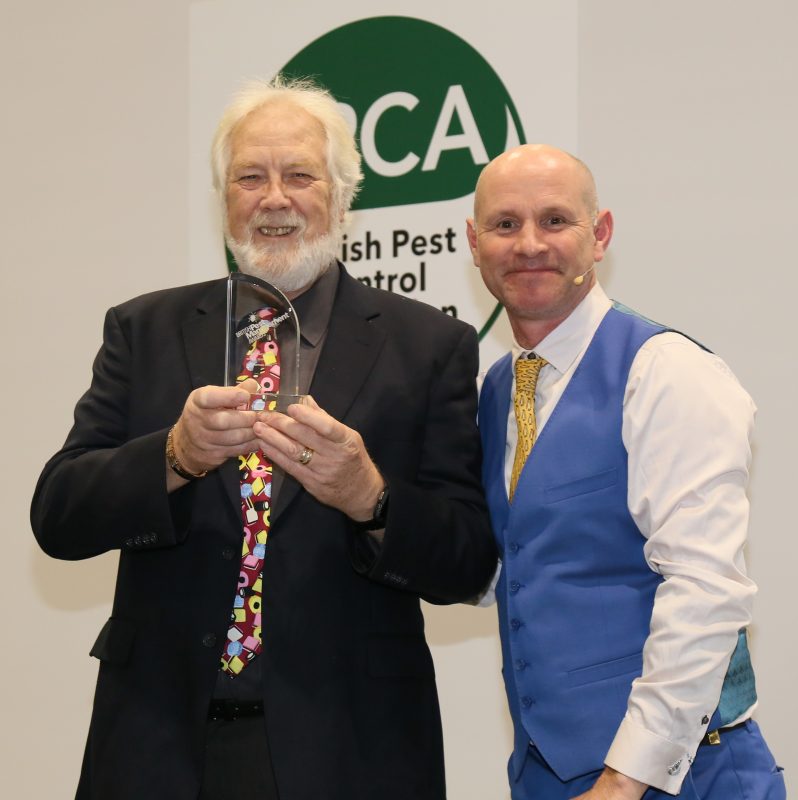 On the 20 March at the British Pest Management Awards run by the BPCA, Dr Jonathan Wade was the first recipient of the Lifetime Achievement Award. With a distinguished career spanning 50 years he is well known and highly respected throughout the industry and we are delighted his passion for, and impact on, pest control has been recognised with this award. Dr Jonathan Wade,

JO to everyone who knows him, obtained a first degree in Zoology and subsequently was awarded a PhD from the Liverpool School of Hygiene and Tropical Medicine for work on vector mosquitoes.  Following on from his time in Liverpool he became an advisor to the Libyan Government based in Tripoli with the Ministry of Health for almost two years working predominantly on insect vectors of disease.

After returning briefly to the UK Jonathan was appointed Head of Pest Control in the Emirate of Dubai where he spent eight years building an effective pest control unit which numbered over 100 operatives by the end of his appointment.  His department was responsible for all pest control in Dubai ranging from vector and nuisance mosquitoes, rodents through to feral cats and dogs and involved him in establishing policies which covered habitat management, restaurant hygiene and refuge collection.  This diverse and multi-faceted role gave him wide ranging experience both as a practical field pest controller and strategic planner; he also developed his skills as an application expert for pest control equipment and a passion for pressure maintenance valves in compression sprayers.

During his time in Dubai he maintained contact with the Medical Entomology Department at the Liverpool School of Tropical Medicine and was awarded an honorary Lectureship there in 1987. Whilst in Dubai Jonathan came to the attention of Zeneca Public Health which supplied insecticides and rodenticides to the Emirate and in 1988 he was recruited by Zeneca as a Technical Manager in their Public Health business based in West Sussex, UK.  During his 7 years in Zeneca Jonathan worked as technical advisor primarily in the Middle East region.

In 1995 Jonathan left Zeneca and joined the newly incorporated PelGar International as Technical Director where he was responsible for the technical and manufacturing direction of the developing business.  Jonathan was instrumental in the growth of the business from an initial 2-man and a dog operation to a company of over 70 people and sales in more than 50 countries. He announced his retirement in 2015 and stepped down as a Director but stayed on as Technical Coordinator until May 2018.  During his 20 years at PelGar International Jonathan became very well known in the industry for his very informative and amusing presentation skills and was much in demand to run training courses where his deep knowledge and practical experience of pest control around the world was much appreciated.

Read the full BPCA interview with JO looking back on his career and receiving his award here.